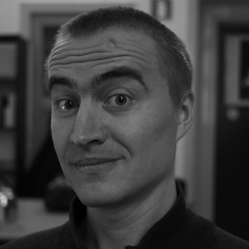 David Kiers (NL) graduated from the Sonology degree program at the Royal Conservatory in Den Haag, the Netherlands. In the recent years his main focus as an image and sound artist has been on the collaboration with Gideon Kiers and Lucas van der Velden under the Telcosystems moniker. Their search for a personal language in the world of abstract computer generated image and sound has produced a string of performances, installations and short films, which have been shown and nominated for awards all over the world. Sonar/Barcelona, de Appel/Amsterdam, International Short Film Festival/Oberhausen, Boijmans van Beuningen/Rotterdam, ArsElectronica/Linz, Cyberarts Festival/Boston, International Film Festival Rotterdam, Transmediale/Berlin and Wood Street Galleries/Pittsburgh USA, to metion a few. In 2009 Telcosystems received the Gus Van Sant award for best experimental film for their short film Loudthings. Besides this, David Kiers has composed music for various theatre and video productions, among them Jefta van Dinther’s productions Kneeding, GRIND, THIS IS CONCRETE, Plateau Effect (for Cullberg), As It Empties Out, Protagonist (for Cullberg), Dark Field Analysis, The Quiet, and Mountains (for Cullberg).